How vultures, cattle, and a minority religious sect are interconnected.

Work with me here.  I need to tell a circuitous story. 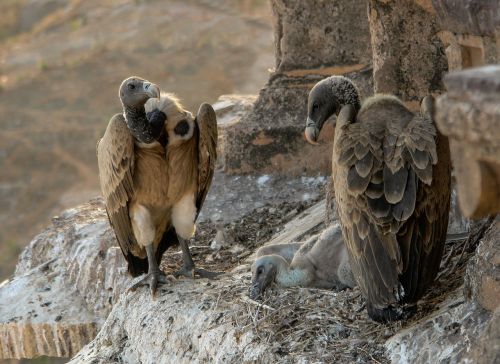 Gyps vultures belong to a genus of Old World vultures that, depending on species, range from south Asia across southern Europe and northern Africa.  Beginning in the 1990s, researchers noted a significant decline in Gyps species in India. And when I say significant, I am talking about a major loss in population: 95% or more of the birds disappeared over a decade. Ten million vultures were gone. Ecologically this was unprecedented.

I became aware of the loss of these vultures when the story was reported May 30, 2000 by ProMED. (See comment on ProMED in endnote.)  Andrew A. Cunningham, a veterinary pathologist with the Zoological Society of London, reported his findings:

“I recently spent three weeks investigating vulture mortality in India at
the request of the Bombay Natural History Society (BNHS) and in
collaboration with, and funded by, the Royal Society for the Protection of
Birds (RSPB). Over the past ten years, populations of Gyps spp. vultures
have declined catastrophically – in at least some areas their numbers have
been reduced by about 96% – and the decline is still continuing.”

Ill vultures were noted to sit on tree branches with drooped necks. Deborah Pain of Britain’s Royal Society for the Protection of Birds, described, ”you see them slumped on tree branches everywhere. And then they just fall off, dead.”

The cause of the disease was unknown, but both a toxicologic cause (a pesticide?) and an infectious cause (a virus?), were theorized. A novel avian virus, perhaps introduced due to the expansion of the Indian poultry industry, was thought to be a possible cause. But no one knew, which was extremely frustrating given the consequential impacts the outbreak was having on the population. 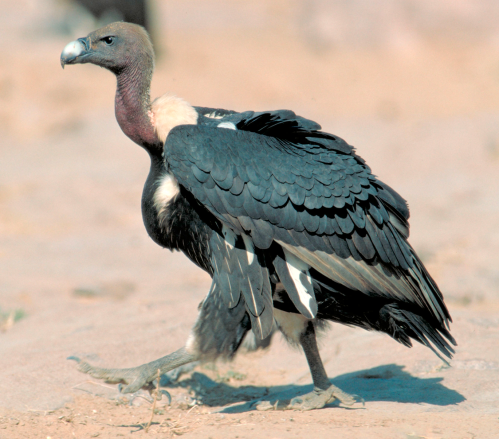 Birds affected included the Indian white-rumped vulture (Gyps bengalensis) which was previously the world’s most common bird of prey. 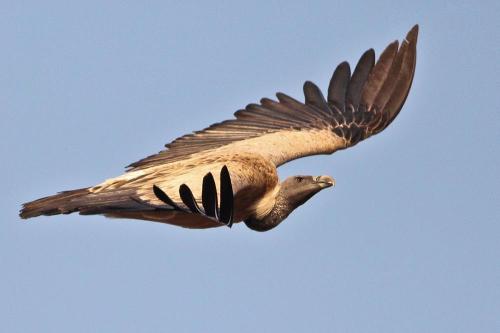 Additional vulture species affected included the Indian Vulture (Gyps indicus) and the slender-billed vulture (Gyps tenuirostris).  Imagine birds as common as our American Crow suddenly disappearing from the skies. And disturbingly, ornithologists had no idea why. 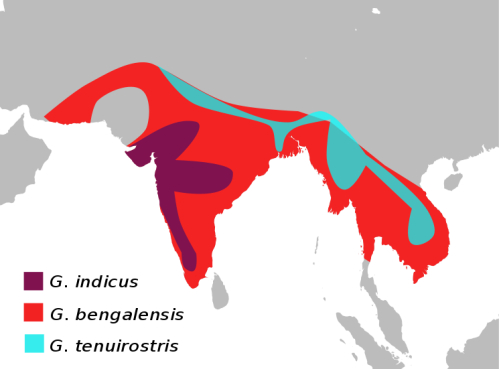 Whatever the cause, the problem was spreading. Vulture population declines were soon noted in Pakistan and Nepal as well. The griffon vulture (Gyps fulvus) has a range that spans the Indian subcontinent across the mideast and into parts of southern Europe and west Africa. Would it be infected by the same presumed virus? Ecological implications of the epidemic spreading into Europe and Asia were horrifying.

Vulture declines triggered two sets of cascading ecological and cultural impacts.  Normally, vultures provide an essential ecological service, scavenging and disposing of animal remains.  Animal carcasses that would have been consumed by vultures now lay rotting in the sun. Loss of the major scavenger species led to a surplus of food (and I use the term loosely) for other scavenger animals. Of greatest concern was the potential for a population explosion of south Asia’s feral dogs, many of whom carry rabies.  More rabid dogs, ultimately, means more people being bitten and subsequently dying of rabies. Too few know that once a person has symptoms of rabies, the disease is essentially universally fatal.  Thanks to a robust veterinary and public health infrastructure, rabies is under good control in the United States.  However, rabies remains the 10th most common infectious disease cause of death worldwide. An estimated 50,000 to 60,000 people die of rabies annually, with 20,000 to 30,000 deaths in India alone. A 2008 study (Markandya, et al) estimated that excess rabies cases attributable to the vulture decline cost the Indian economy $34 billion over the 14 years 1993–2006.

The second set of cascading impacts was cultural. We should pause and discuss the religious and ethnic Parsee of India who practice Zoroastrianism.  This is a monotheistic faith that originated in Persia (now Iran) in the 6th century BCE. The faith influenced the beliefs of other monotheistic religions including Islam, Judaism and Christianity. Zoroastrians fled Iran after invasion by Islamic armies and the first Caliphs. In the 9th Century CE, a group of Persian Zoroastrians fled to India. Parsee means Persian in the Farsi language and thus Persian Zoroastrians became known as Parsee. They survive as a tiny minority in India, though this is the largest population in any country in the world. Within India, the Parsee population is centered in Mumbai. 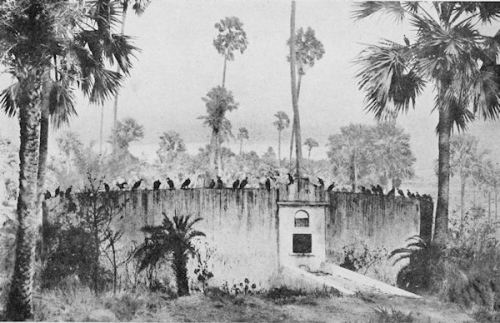 According to Zoroastrian beliefs, fire, water, earth, and air are sacred elements to be preserved. As a result, burial or cremation of the dead is considered unclean. The Zoroastrian funerary practices instead involve disposing of the dead in a dakhma or ossuary where the body is laid out to be cleaned of the flesh by vultures. The feeding of one’s body to birds is the final act of charity before leaving this world for the next. In India, these funeral sites were built as towers and came to be known as “Towers of Silence.”  A dakhma that serves the needs of India’s largest single Parsee population in Mumbai is located in Doongerwadi – 54 acres of forest surrounded by urban sprawl.

But what happens when the birds who facilitate one’s passage to the afterlife have disappeared? A three thousand year old burial tradition was upended in a decade.  In some dakhma, nonexistent vultures have been replaced by solar concentrators which desiccate the corpse consistent with the prohibition on defiling fire, water, earth, and air.  In other dakhma, the solar solution is reported not to have worked. The cultural impacts of this sudden change on a central rite of one’s faith are hard to overstate.

Meanwhile, in 2002, J. Lindsay Oaks, a veterinary pathologist at Washington State University- Pullman, investigated the population decline impacting Gyps bengalensis in Pakistan as part of a project supported by the Peregrine Fund and the Ornithology Society of Pakistan, with logistical support from Bahauddin Zakariya University and the Pakistani National Council for Conservation of Wildlife. He reported to ProMED grim findings from Pakistan troublingly similar to those in India:

“Field studies over the last 2 years in the Punjab Province indicate significant population declines (up to about 80 percent) associated with high adult mortality rates (11-27 percent).”

An intriguing pathologic finding noted in three-quarters of the examined vultures was the presence of urate crystals on the birds’ internal organs consistent with visceral gout. Either an infectious agent or a toxic chemical was killing the vultures.  Examining the kidneys, the birds had acute kidney failure with uric acid crystals in the tubules.  Inflammatory changes were not consistently present.  This suggested a toxic-metabolic rather than infectious cause.    Additionally, an infectious work-up did not identify pathogens associated with avian kidney disease.  Multiple chemical agents were ruled out based on testing.

The research team hypothesized veterinary drugs might be the cause.  Vultures ingested the meat from dead cattle – perhaps the birds were exposed to pharmaceuticals administered to cattle prior to their death.  The team surveyed local veterinarians regarding what drugs they used to treat cattle and identified a single drug commonly associated with kidney toxicity:  diclofenac.  Diclofenac belongs to the group of pharmaceutical drugs known as the nonsteroidal anti-inflammatory drugs or NSAIDs. This drug class includes common medications used by both medical and veterinary practitioners, such as ibuprofen.  Oaks and his colleagues tested 25 birds for diclofenac and all 25 had significant concentrations of the drug.  Furthermore, by testing Gyps bengalensis birds that had been injured and could not be returned to the wild, they confirmed a dose response of the exposure.

Diclofenac was identified as the principle cause of the vulture declines.  Oaks presented his group’s research findings at the World Conference on Birds of Prey and Owls, held on 18-23 May 2003 in Budapest, Hungary.  Eventually, in 2006, the governments of India, Pakistan and Nepal banned the manufacture of diclofenac.  Pharmaceutical firms are instead promoting an alternative NSAID, meloxicam, which is safe for vultures.  Unfortunately, decline in vulture populations continues, though at a slower rate.   Three species of Gyps vultures are critically endangered and may still go extinct in the wild. 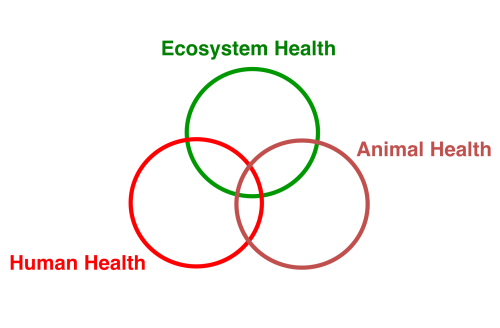 Conclusion:  One Health
This story illustrates interconnections between human health, animal health, and ecological health. Introduction and widespread imprudent use of a veterinary NSAID for the treatment of cattle (a domesticated species) had cascading, interconnected ecological and cultural impacts. Feeding on cattle carcasses, Gyps vultures (a wildlife species) ingested diclofenac residues and suffered high rates of mortality due to visceral gout.  Loss of vultures represented a collapse of species diversity and the near loss of an entire trophic level in the south Asian ecosystem. Feral dogs filled the trophic gap with resulting population growth.  Incidence of dogbites increased and cases of humans exposed, infected, and killed by rabies increased.  Aside from the immeasurable human costs of suffering and death, the fiscal costs of responding to rabies is notable.  And 20 years of diclofenac use forced the Parsee to abandon funerary traditions practiced for 3,000 years.

What is the lesson here?
Development of new pharmaceuticals involves multiple research steps from the basic science laboratory to trials conducted in clinical settings. Even after FDA drug approval, post-marketing research will identify adverse reactions not seen in clinical trials. I have the utmost respect for researchers who navigate these labyrinthine protocols and regulations.  Such regulations protect healthcare consumers from adverse drug effects and they have been generally effective in this goal.

Yet pharmaceuticals may impact species aside from the intended human recipient.  In the case of diclofenac, the drug was being used for veterinary purposes, yet sickened vultures.  Drug manufacturing has been documented to lead to contamination of effluent waters with antibiotics (as one example).  And every day millions of people follow their doctor’s orders, ingest medications, and then urinate active drug and drug metabolites into our waterways.  The traditional research and regulatory regimes for pharmaceutical drug approval typical do not consider such downstream environmental impacts. I would argue it is time to change that myopic focus.

If you have not heard of ProMed or used the website, I invite you to take a look. ProMED, the Program for Monitoring Emerging Diseases, is a web based reporting system for disease outbreaks and not just for human diseases; ProMed also reports animal and plant disease outbreaks. The site was established in 1994 with the support of the Federation of American Scientists and SATELLIFE, but since 1999, has operated as a program of the International Society for Infectious Diseases.

Green, RE, I Newton, S Schultz, et al. 2004. Diclofenac poisoning as a cause of vulture population declines across the Indian subcontinent. J Applied Ecology 41(5): 793- 800.

Karkaria, B. 2015.  Death in the city: How a lack of vultures threatens Mumbai’s ‘Towers of Silence’ Guardian. (Link)

Markandya, A, T Taylor, A Longo, et al. 2008. Counting the cost of vulture decline- An appraisal of the human health and other benefits of vultures in India. Ecological Economics 67: 194- 204. (Link)